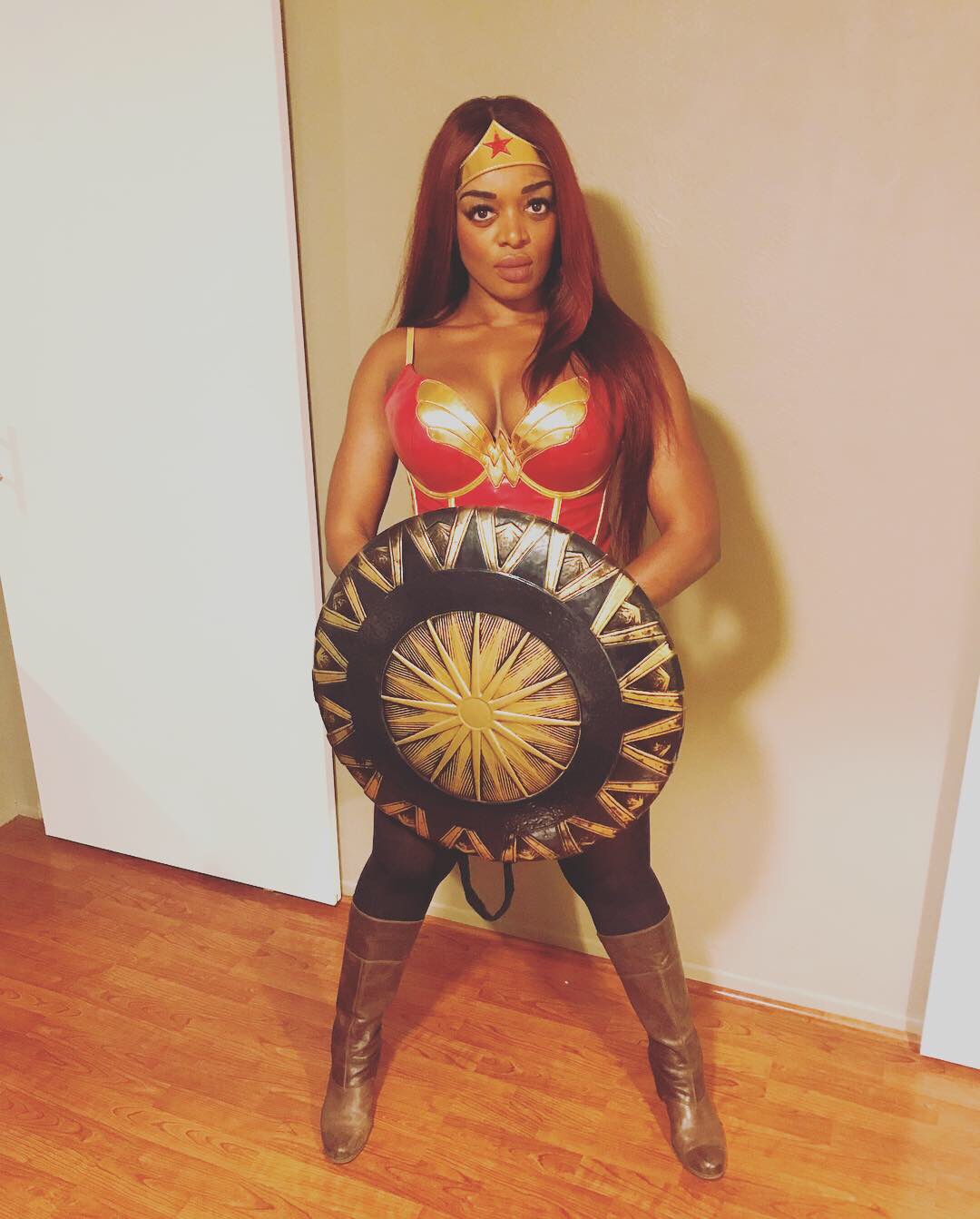 I’ve always had a fascination with costumes, especially Halloween costumes! The idea of escaping & becoming someone else appealed greatly to me especially having a childhood like I had. I’d gone from Goldilocks gone bad to the mad hatters mistress. 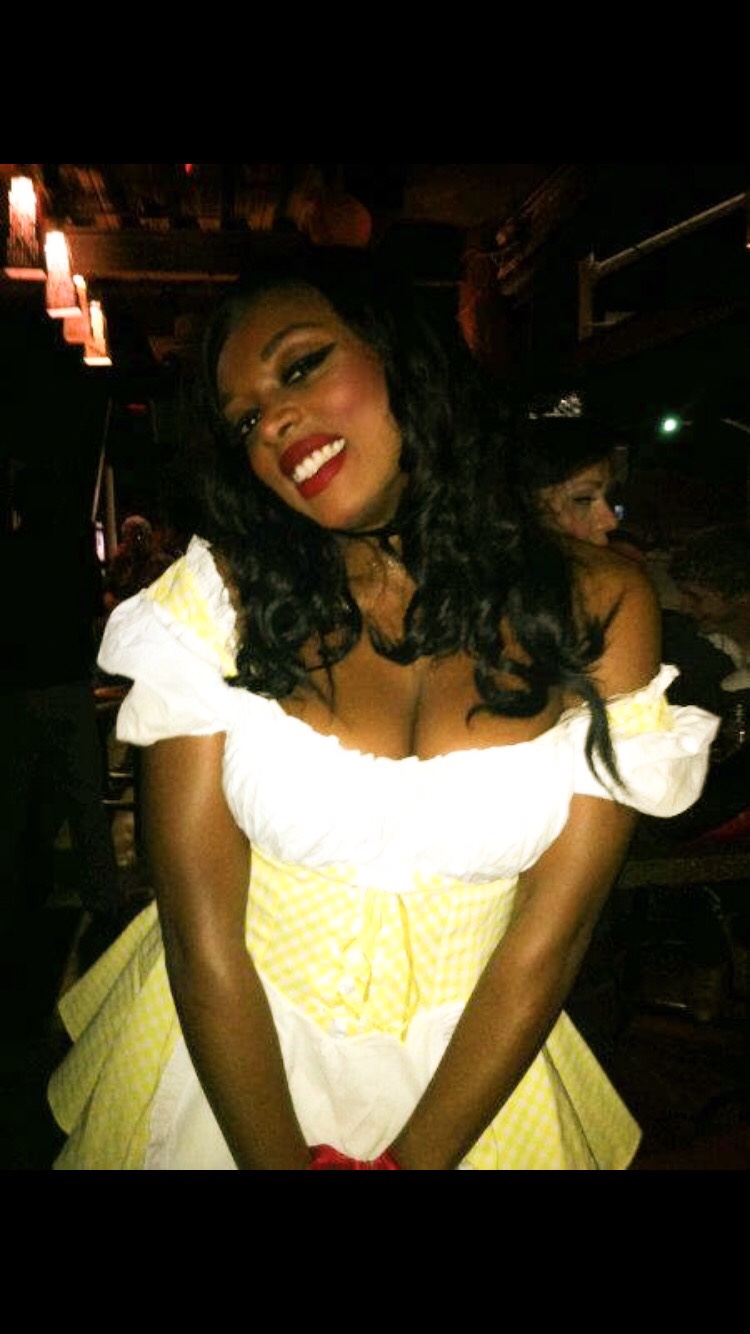 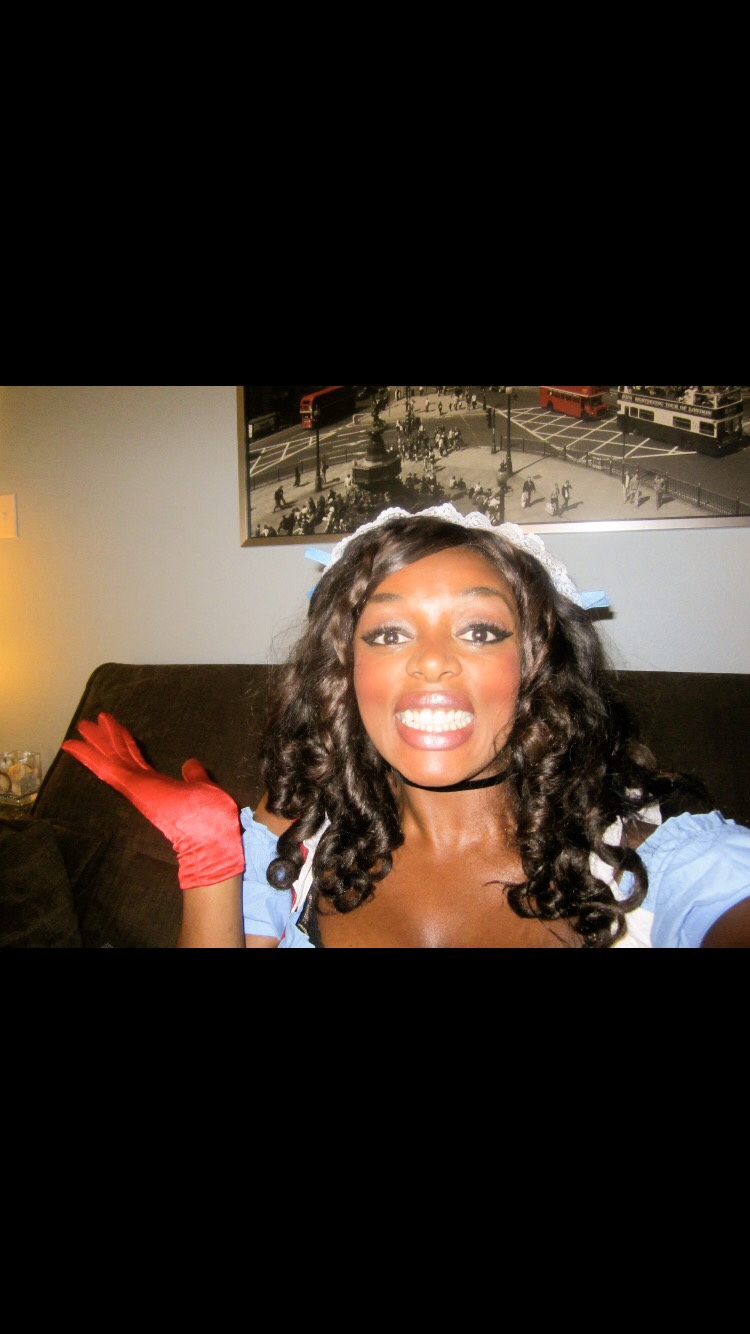 After watching the latest Gal Gadot Wonder Woman movie last year I felt empowered as the first female super hero & decided to dress up like her for Halloween! As you can see I went with classic Wonder Woman meets the contemporary version & it felt bloody brilliant! 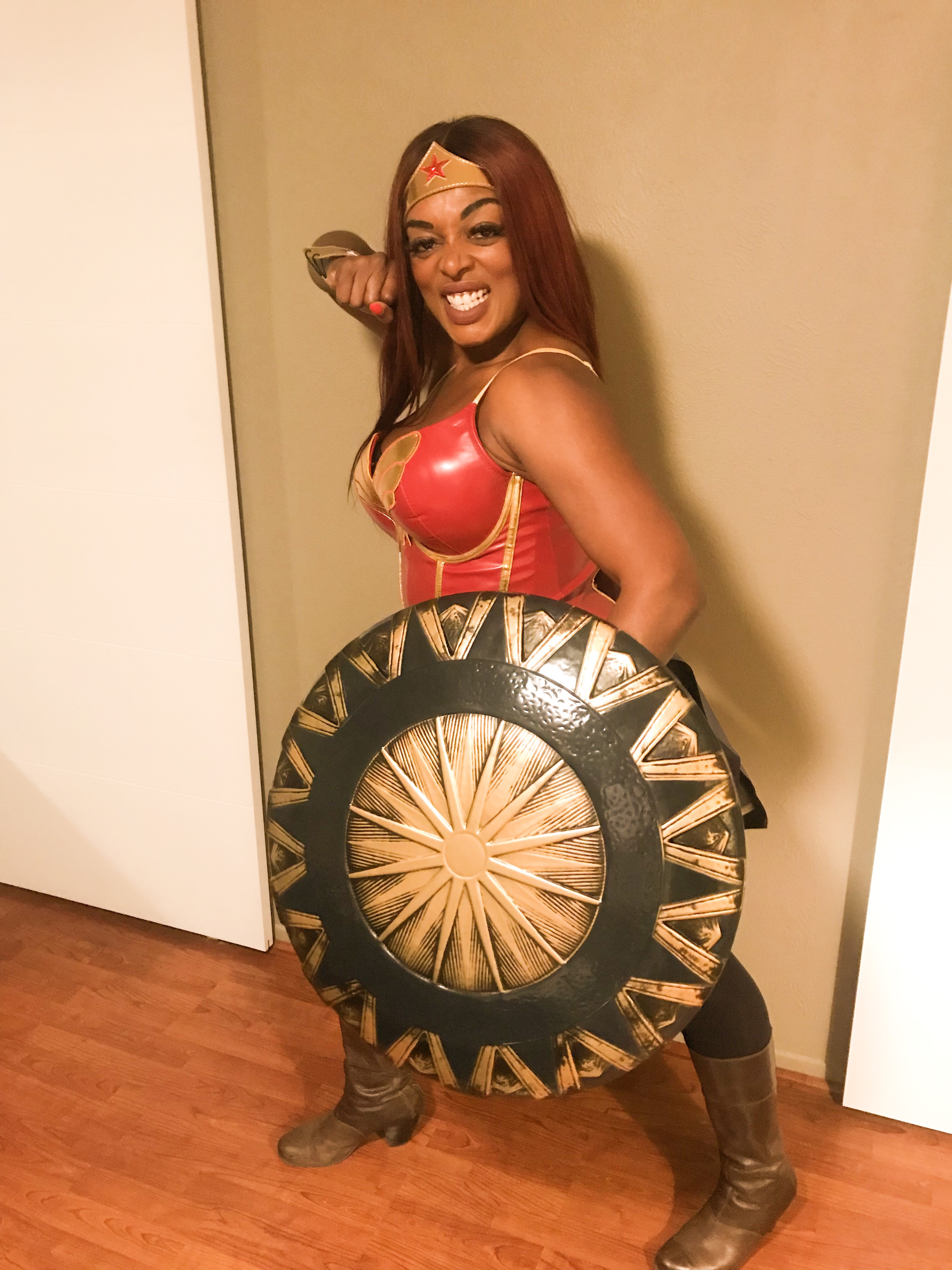 10 reasons why I decided to become Wonder Woman are:

10. She is a female warrior, a pillar of strength both physically & mentally confident in all that she does. She was the first female member of the justice society a.k.a she can keep up with the boys like Batman & Super man!??

9. She has very snazzy weapons like her lasso of truth- a lie detector (Wonder Woman was originally created by William Moulton Marston whom also invented the lie detector test). Wonder woman’s lasso compels those trapped in it to tell the truth. In addition her bracelets are capable of stopping bullets, who wouldn’t want those in this day & age?!

8. She was raised by strong Amazonian women in paradise Island or what is now called Themyscira & her mum is Hippolyta the queen of the Amazon’s so that makes Wonder Woman…umm is it too late or can I still sign up for that?

7. She has integrity & always tries to do what’s right despite the cost or how hard it is an example assisting to eradicate the Nazi’s in world war 2!

6. She is open to learning new things & knows her limits which aren’t many when your an Amazonian princess but oh well….?

5. She isn’t too proud to admit when she’s wrong.

4. She is kind to others & is strong in her resolves holding no labels on people. An example of this is Wonder Woman is the first DC hero to not only officiate same – sex marriage but is bisexual herself living on an island with only women she replied to Clark Kent (in 2015) when asked “Clark, my country is all women. To us, it’s not ‘gay’ marriage. It’s just marriage.’ Beautiful!❤️

3. She is determined to be her best self & live the life she was destined to live with all the gifts that were bestowed on her.

2. She is the goddess of wisdom so who doesn’t live for a smarty pants or full fledged nerd?! I do!??

1. Overall Wonder Woman is a total bad Arse warrior, she is a butt kicking, take -charge champion who is one of the longest running superhero characters of all time breaking the mold for female’s being portrayed in film as “the help” so to speak so okay I said it! 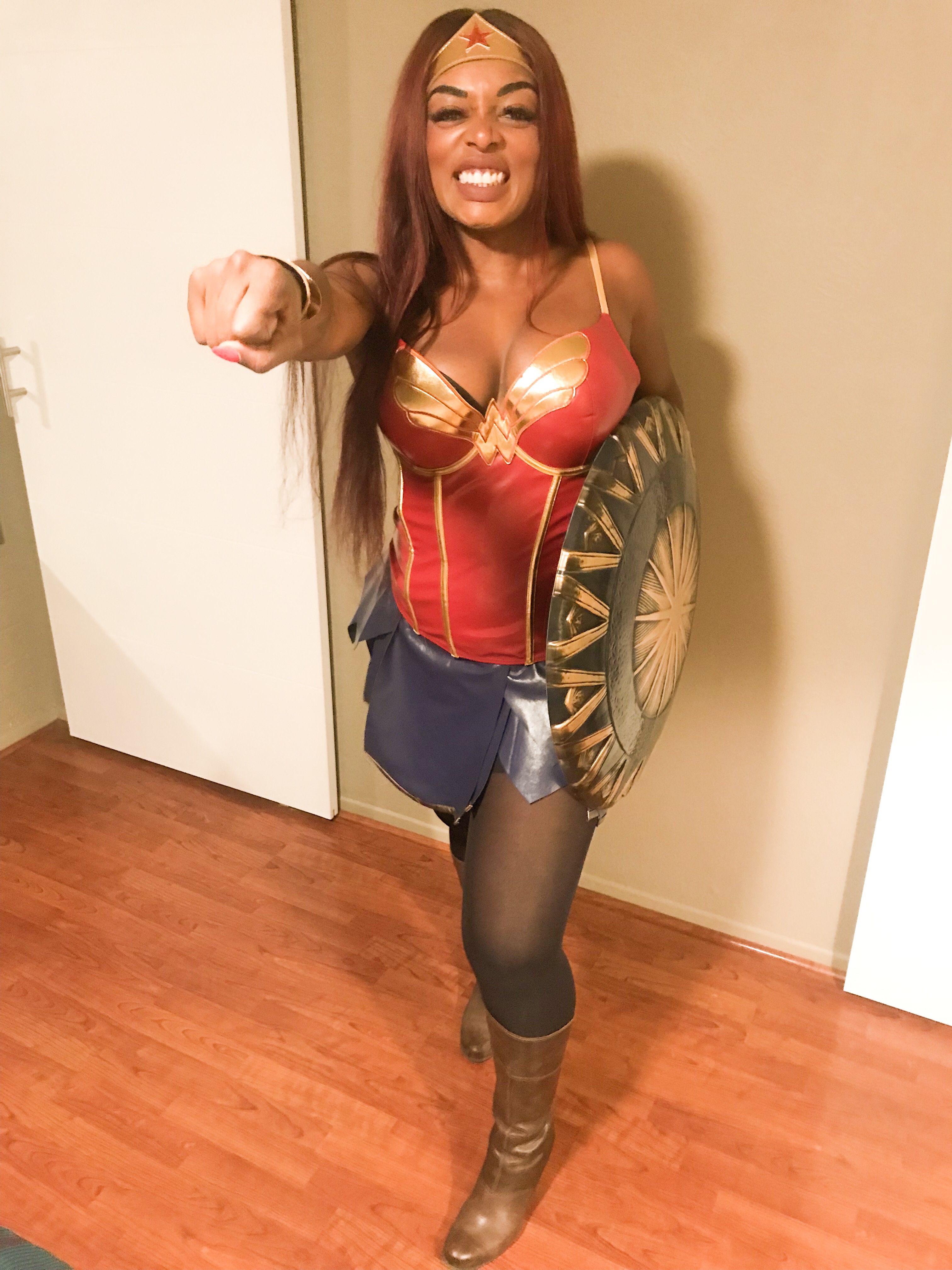 An inspirational figure & symbol of hope Wonder Woman is EVERYTHING! She’s inspired me greatly going through the tough times in my life that I find myself asking WWWWD (what would Wonder Woman do?). Urged me to lift others to wear that crown & support them during tough times as well or defend myself against negative people, I’m a big fan! Wearing my medical devices were almost like my snazzy Wonder Woman gadgets of a lasso & bullet proof arm bracelets. My Tandem T:Slim X2 pump (Shanaenae my bestie) was stashed in my bra which was easily removable to check & administer insulin as well as my dexcom G6 Sensor (Shanequoi) was easily encased in my corset with no irritation! ?? So I urge you to go forth & find the Wonder Woman in you & rise up & SHINE!!✨✨

Cheers for reading Lovies & catch you next time!