Ello Lovies! We’ve officially entered the holiday season with Halloween just yesterday & thanksgiving around the corner! ? Apologies to anyone who doesn’t know what Thanksgiving is. It’s our first Christmas here in the States except there are no presents which in my opinion is the BEST, no pressure & no expectations!?? Just some great company & good food shared among family & friends if your lucky.

I can’t tell you how nice it is to finally have a physical change of weather (especially for people who live in the Desert like myself.) I love this time of year as it reminds me of living in London when the air is crisp in the morning & you can see the fog of your breath when you talk…

After 7 months of planning & living in chaos our renovations you reckon is DONE!!! Yes people we survived our renovations!!!? Zack & I are so relieved to have our house back & have even gone as far as hosting 2 intimate dinners with friends. Here is the finished product… 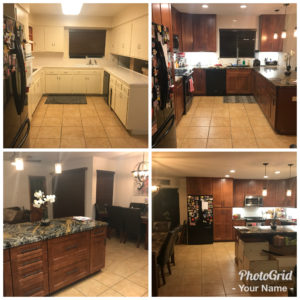 The top left image is the before the renovations. I took this pic collage as I like to be dramatic & showcase the exact change so you can see the differences!?Doesn’t it look like a different house?? Our contractor & his team did such a bang up job that I find myself going into my kitchen at 2 am & turning on the lights just so I can look at it again…?

Other than the maple cognac cabinets being installed we raised them higher & got rid of the Soffet to the right (see the original image) that blocked off the entire room opening it all up & with that created a Peninsular. In addition lighting played a big part as we added 5 new canned lights, 3 pendant lights over the peninsular, a Game of Thrones? inspired rustic chandelier over the dining table (see bottom left image) & lastly a new fan/light in the music room. We centered the sink, (as it wasn’t before) ? purchased a black under mount sink (so durable) & the piece de resistance was the Volcano Granite countertop spread out. A new range & gas & electric combined stove completed the look with white subway tile backsplash that opened up the room entirely. A big shout out & cheers indeed to AZ Home Remodel we are forever grateful!???

Halloween is most peculiar in the best way with pumpkin carvings & people dressing up for fun. I’d never seen a real life pumpkin until I moved to the States & to be honest don’t really care for the taste. When this holiday comes around I hear “pumpkin this & pumpkin spice that” &  get so enthralled with this pumpkin madness!?However, if you can’t beat them, join them & my favorite thing to do during Halloween is dress up! Here are my top 3 outfits that had I done anything this year I would have dressed up as… 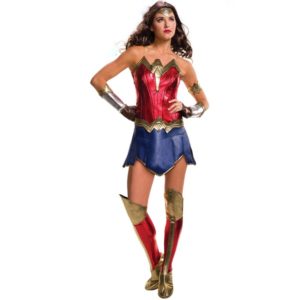 Option 2: Khaleesi & Khal Drogo because it’s Game of Thrones’ epic couple & those characters are EVERYTHING!! All hail the Mother of Dragons! 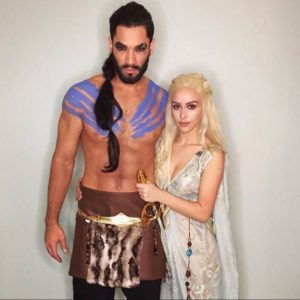 Option 3: Pennywise from the movie “IT” though creepy this character has risen in popularity with the updated release of the movie… And it’s creepy A.F. 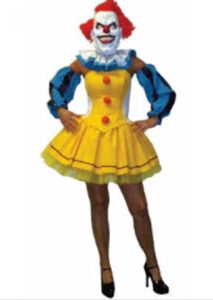 I hope you all made some amazing memories this year. Catch you next time Lovies & remember comments are alway welcome! Cheers & Best Wishes,